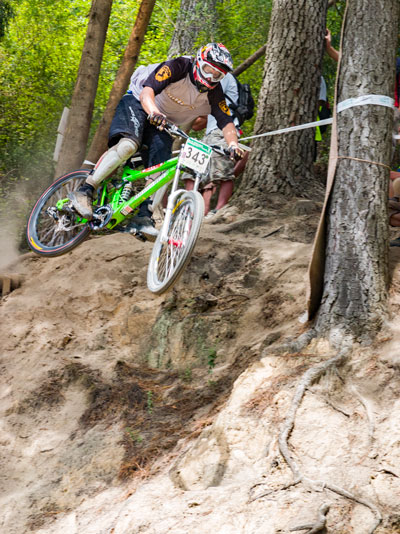 The 2012 Queenstown Bike Festival (March 29-April 9) is opening with a smile with Auckland comedian Joseph Harper rendering his acclaimed show "Bikes I've Owned Versus Girls I've Fallen In Love With" at the Crowne Plaza on Friday March 29.

The Queenstown Bike Festival is a ten day festival programme offering more than twenty competition and social events involving all things about the bike, rolled into an exciting package for adults, children, recreational and elite riders, and the general public.

Opening the festivities, Harper will deliver his autobiographical piece about bicycles, love and misanthropy, which was nominated for a Billy T award at the 2011 NZ International Comedy Festival.

The 75 minutes show traces the twenty-something span of his life story to date by punctuating the progress of his love life with various bike upgrades, the latest restoring back some equilibrium when the inevitable romantic trauma occurs.

Delivered in a relaxed and chatty style, this comedy begins with a retelling of his first amorous dream involving a velodrome, lycra and Sarah Ulmer, and ends on his musings on the similarities and differences between being in love and riding a bike.
Literally born on the back of a bike into a Christchurch family with a proud bicycling heritage, Harper presents himself as a "backyard cricket commentator, plain clothes bicyclist and nipponophile",  amongst other things, and "possesses a Charlie Brown view of the world with dreams of a kind of plebeian zen".

" I'm really glad to be performing in Queenstown." Harper says. "Last time I came here I was 12. My brother and I were playing this game with my uncle's dog and a tennis ball on a balcony. Long story short the ball got off, the dog followed and my brother spent the remainder of the holiday minding the dog with a broken leg."

" I'm hoping this trip to Queenstown will be less tragic. Hopefully not tragic at all to be honest."

The show is preceded by a casual dinner at the Crowne Plaza restaurant, and will be followed by the Bike Festival awards for the best "Made in New Zealand" bike.

Qualifying bikes can be made from scratch, bamboo or other material, lovingly restored, or freshly manufactured, and can also be made with a creative twist.

Initially displayed in the shop window of R & R Sport Queenstown the week prior to the festival, these fabulous bicycles will be judged by a tongue in cheek jury constituted by the festival organisers, R&R Queenstown  and NZ Mountain Biker magazine.

The winning bike of the night will earn the ' Best Made in NZ with love" title.

Tickets for the opening night are $85, and include the show, meal and awards. They can be purchased at the Crowne Plaza or by contacting the Southern Traverse office on 03 441 8215.

Information on the Queenstown Bike Festival and events online entries are available on the web site www.queenstownbikefestival.com