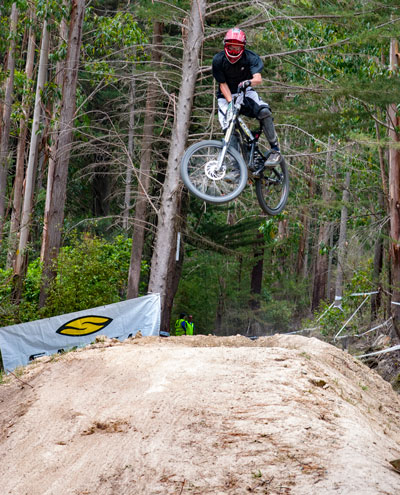 The Queenstown Bike Festival returns for a third year

Making its third consecutive appearance in the Wakatipu - The Queenstown Bike Festival is back, bigger and better than ever. Running from the 22nd of March through to the 1st of April 2013, the ten day festival is packed with events for both the casual weekend warrior through to the hardened pro.

With 25 events in total there is something for everyone. Nearly every genre of cycling gets a look in - mountain biking, cross country, downhill, freeride and park. Road biking, casual pedals, even kids rides. It's not just activities on the bike - there are bike films, parties and more - all in celebration of cycling culture!

Some event highlights include:
The family favourite the New World Tour de Wakatipu is back - starting at Millbrook Resort and winding its way through the basin and finishing at Chard Farm Winery - this cross country race is open to all riding abilities and has become a firm family favourite over the years.

Those looking for a bit more action with their adventure, look no further than the Super-D - this gondola assisted race is never short of up's, downs, thrills and spills. Likewise the Vertigo Bikes Dirtmasters DH is a hearty challenge to the best downhillers not only in Queenstown but to a host of national and international athletes testing their skills in the Queenstown Bike Park.

Returning for a second year is the Teva Slopestyle - held in central Queenstown. The event is now a FMB World Tour Silver Event. Taking a cue from snowboard culture, this fan-friendly big air event is something that must be seen to be believed.

Top pro's and invited up and comers launch themselves on massive jumps and man-made features all under lights and to the roar of the crowd. This spectator friendly event is not only free to watch but the adrenaline highlight of the festival - not to be missed!

New to the Festival this year is the R & R Sport Mega Avalanche - starting high on the slopes of the Remarkables Ski Field and ending at the lake this test of endurance, courage and brakes is something that will surely be a fan favourite. With a mass start and motorway speeds predicted this is the sort of race where legends are born!

With over 5000 entrants and attendees at the 2012 festival, bringing in more than $2million to the local economy, the Queenstown Bike Festival has become a summer fixture in the local events calendar and a valuable asset to tourism in general for the Queenstown area.

Organizers Geoff Hunt has high hopes for the festival:
"This year, we're aiming to provide unique, affordable and achievable events for people to participate in or attend. We want to create a festival that appeals to a wide swath of biking culture - mountain bikers, road riders, BMX, freeride - even tandems and unicycles! At the same time connecting with a range of riders - men, women, baby boomers, the youth market, kids, racers, spectators and visitors to Queenstown."

The exploding popularity of cycling in New Zealand and the impact of cycle tourism in Queenstown means The Queenstown Bike Festival perfectly placed and leading the charge in this emerging industry.